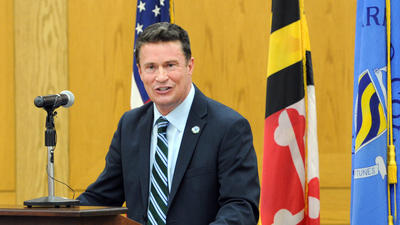 Harford County Executive Barry Glassman laid out, in his fourth State of the County Address Tuesday, how the county has retaken the high ground — in terms of its improved financial picture — putting the Glassman administration in a better position to tackle the ongoing opioid crisis, support education and public safety and assist low-income residents and people with disabilities.

“You see, if you want to lift somebody up, you’ve got to be on high ground,” Glassman said.

The county executive, who is in the final year of his first term and is seeking re-election, delivered his address titled “Back to Higher Ground” in the Harford County Council chambers in Bel Air. He spoke before the seven council members, representatives of his cabinet and county employees, allied agencies such as Harford County Public Schools, the Sheriff’s Office and volunteer fire and EMS companies and members of the community.

He announced several new initiatives, such as plans to join neighboring counties in suing opioid distributors and manufacturers, allocating funding for a 24-hour crisis center for people with mental health or addiction issues and setting aside land for a custom baseball field for children with disabilities.

“Most of you know that, of all the successes, my work with our youth and families and those at risk give me the most reward,” Glassman said. “It has given me the confidence to try and beat back the opioid epidemic, homelessness and those who have not found the economic recovery and need navigation for health care and mental illness.”

Gavin Donnelly, a third grader at Ring Factory Elementary School in Bel Air, introduced the county executive. Gavin, 8, discussed his interest in local government, which he learned about in social studies, and how he wrote a letter to Glassman to learn more about his job.

Glassman wrote back and invited Gavin to visit his office, a visit that showed the youngster what “local government does to make our lives better,” Gavin said, reading his prepared speech.

Gavin said he invited Glassman to see him perform in his school talent show, and the county executive was in the audience.

“He cares about me and he caresabout our community,” Gavin said. “I learned so much about what Barry Glassman’s office does for our county, now it’s your turn to hear.”

Gavin attended with his parents, Jen and Ted Donnelly, and his 12-year-old brother, Aidan, a sixth-grader at Patterson Mill Middle School.

He said later that the experience was “actually a little scary at first,” but it got easier as he went along.

“Gavin is a perfect example of why we work so hard for Harford’s future generations,” Glassman said in his speech.

Harford County has regained the financial high ground by keeping its expenditures low, which has meant “difficult decisions” when it comes to spending, Glassman said. The end result has been revenues exceeding expenditures for three years straight and a doubling of the county’s cash reserves over the same time period, according to the county executive.

“Our fund balance, after nearly being depleted when I came into office, has been restored,” Glassman said.

He said that “it is imperative that we continue to work on adequate reserves.”

Commercial and residential property assessments have increased 8 percent since “bottoming out” in 2014. Glassman said the county’s financial turnaround has happened “without touching” the property tax rate.

He plans to keep local income tax rates “frozen,” as the county treasurer and budget director monitor the national economy and keep their eyes on how changes in federal tax policy could affect Harford residents.

Glassman said he has allocated $24 million during his administration, ““nearly all of the county’s increased spending,” toward salary increases for teachers, deputies, corrections officers and county employees.

The county, under Glassman, has developed a “fiscally responsible and realistic capital improvement plan” to cover infrastructure projects, such as highway improvements and roof replacements, he said.

His administration has also funded larger capital projects, such as the replacement of Havre de Grace Middle and High School. School system officials plan a groundbreaking this spring, with the combined middle and high school opening in 2020 — Glassman, a 1980 graduate of HHS, said he hopes it is in time for his 40th reunion.

Glassman briefly went off script to address concerns about events that bring large crowds of visitors to Harford County.

He talked about the upcoming national Bassmaster Elite Series fishing tournament and half-marathon running festival that will be run on both sides of Susquehanna River, with runners crossing the Thomas J. Hatem Memorial Bridge.

Glassman acknowledged the inconvenience of large crowds, but he cited the revenue generated by tourism that will support restaurants and hotels, plus the $1.6 million the nonprofit Visit Harford has received through the hotel tax over the past three years to market Harford destinations. Hotel tax revenue has also been distributed to the cities of Aberdeen and Havre de Grace to support their tourist destinations.

“My pitch is that this helps us all; it lifts all our boats and that we should stay open minded and make sure that we become active in the tourist industry, and we can do it by working together,” Glassman said.

He recognized the county’s first medical director, Dr. Timothy Chizmar, and the members of Harford’s EMS Standards Board, who came on board last year as the Glassman administration created a county-run EMS service to augment the service provided by volunteer fire companies through volunteers and paid paramedics.

He said he will push state leaders to revise Maryland’s funding formula for public education, as Harford County has increased its public school funding by $15 million over the past three years versus an increase of $1 million in state funding.

Glassman said he will also petition the state to obtain “our fair share of revenue” from the gas tax for local highway projects — he said the county has committed $22.7 million over three years for road maintenance.

“The greatest threat to local government is the same that faces most of our families — the uncontrolled cost of health care and prescription,” Glassman said. “It continues to outpace and threaten future wages and benefits of our employees and partnering agencies.”

He said Harford representatives with work with their national counterparts in Washington D.C., “as a solution is critical.”

Glassman highlighted in his speech the county’s successful programs to collect supplies such as winter coats for low-income residents, to connect families with resources and housing and the iCanBike Camp to give children with disabilities the chance to take their first bicycle ride.

He said the county will partner with the Harford Miracle League to develop a baseball field on county land along Schucks Road so children with disabilities can play baseball.

Glassman became emotional as he talked about a note he received from a mother of 2-year-old twin boys — he called her Ms. Jones — who had been homeless and found housing with help from county staff.

He said Ms. Jones called him “the modern-day Superman,” but Glassman said “real hero” was Lenora Robinson, of the Department of Housing and Community Development, who helped the Jones family.

Glassman asked Robinson, whom he called “my Lois Lane,” to stand and be recognized, and she received a standing ovation from the audience.

“Lenora, thank you, and thank you to my Cabinet, staff and county employees who have made the past three years such a success and carried my message forward,” Glassman said.